This past week our family spent a few days at our dear family friend's bay house.   We went canoeing, kayaking, enjoyed crabs, relaxed and watched all our kids have fun, all the same things we did about a year ago with our family, though this time one person was missing.

Found this picture tonight right after returning from our visit from the bay house, right after canoeing/kayaking this morning.   We miss you Dad! 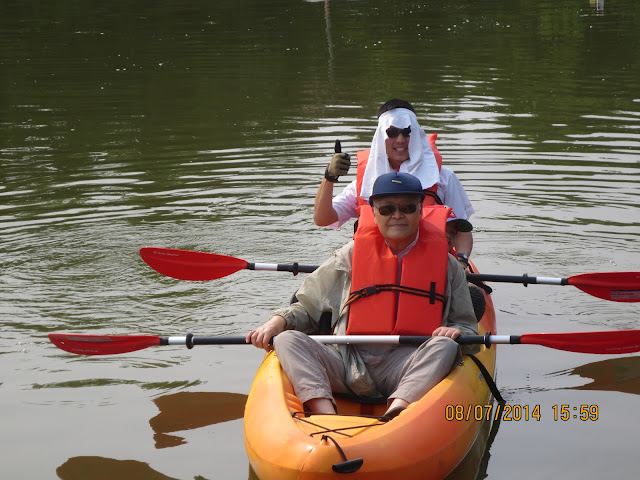 Along with the sadness comes a lot of gratitude this Father's Day as I thank God for giving my sisters and I such an amazing Dad.  I've often heard it said that we sometimes view God the way we view our earthly Father. If our father wasn't always supportive, wasn't there, we may find it difficult to understand what our heavenly Father truly is like. 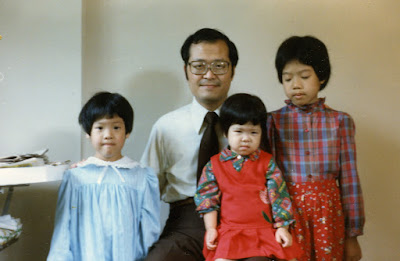 A few years ago, I remember Dad sharing in a parenting class he often did not know what to do as a father. He didn't have much experience with kids prior to us.  As with anything he shared that all he knew to do was to pray and so he literally prayed about everything. In his prayer list that we found recently, he even was praying about one of his daughter's wart!  I won't disclose which of us had the wart, but woweee.  God has humbled me to realize that my dad loved us so much and cared for even small matters.  And he believed that God would care about those small matters too.  Completely grateful that I had a father's support, prayers and love throughout the growing seasons of my life.
at 11:02 PM 1 comment:

I recently received an email from a friend of my dad who I don't know.  In the past two years I've gotten many emails from people who were influenced by my dad yet who I don't know.  With each sharing, email, story and more,  our family continues to be blessed knowing how special our husband and dad was. It is still hard to believe he is not with us.

Dickie Lau, a friend of my dad from Hong Kong, recently produced a radio tribute for Dad that was broadcast on the Hong Kong Christian Times website.  We know that we are not the only ones to miss Dad, so as we remember, we also wanted to share this with you. Thank you Dickie for sharing this with us.

Email ThisBlogThis!Share to TwitterShare to FacebookShare to Pinterest
Labels: Chinese, In Remembrance

(Bel)
I was blessed to come across this article tonight that my dad wrote.

For people who love green lawns, there is nothing as annoying as dandelions.  They seem to be almost impossible to get rid of.  For homeowners in expensive neighborhoods, patches of pretty yellow flowers stick out like "sore thumbs."

However, after years of working on lawns, first on a landscaping crew in colleg
e and later as a homeowner,  I  have come to respect the dandelions.

Its Influence
I am deeply impressed by its pervasive power and ability to multiply.  Its flowers put out dozens of seeds that can go far and wide.  It can also multiply through its roots.  The dandelion stands out from other flowers in the yard.

Our Lord commanded us to be good witnesses.  We need to be in the world, and yet not of the world.  Like the dandelion, we should be influencing the world around us.  We, too, should have a life-style quite different from those around us.

It Resiliency
I have a deep respect for its resiliency.  Dandelions are very hard to eliminates.  They are able to survive in any kind of inclement weather, even after harsh winters.  It is so deeply rooted that unless the whole plant is dug out, it will return and multiply again.

From the dandelion, we can also learn how to recover from failure.  Satan seeks various ways to destroy our testimony. By working as the “great accuser,” he will be happy if we do not get up again.  After we fall, many of us may believe Satan's charges and that God does not love us anymore.

I recognize my weakness. I cannot say that I will always do the right thing and never sin.  Yet, if I ever fall, the Lord willing, by His grace and strength, I want to follow the dandelion and rise up again.

Just as Paul says in 2 Cor. 4:7-9, “But we have this treasure in jars of clay to show that this all-surpassing power is from God and not from us. 8 We are hard pressed on every side, but not crushed; perplexed, but not in despair; 9 persecuted, but not abandoned; struck down, but not destroyed.”
We need to understand and claim God's grace and forgiveness and live again.  King David was a good example.  He committed serious sin, however, he rebounded and continued to function.

My Tribute to Dandelions
My experience with flowers was unusual.  To help pay for my college tuition & fees, I once worked as a laborer cutting flowers in the foothills of the Appalachians in North Carolina.  The earning was low, only seventy cents an hour.  The plantation owner did not abide by the minimum wage of $1.25 an hour.  The work hours were long, 13 hours a day, rain or shine.  And seeing how plantation owners exploited laborers certainly did not help my appreciation of buying flowers that only last for a few days.

Having no fondness for extravagance, buying expensive cut flowers has never held much appeal for me.  However, recognizing that many people do like buying flowers, I have learned to respect other people's desire for enriching special occasions with cut flowers.

Maybe my funeral would be a fitting occasion to express my unusual perspective about flowers.  Instead of buying cut flowers, my preference is for a patch of dandelions gathered from the yard.  Besides adding the pretty yellow color, it will be a very special tribute to an unusual flower.

A Tribute to You Dad (from Memorial Service program)


I used to joke with Dad and tell him that my poor vision was because of him.  He would shake his head, chuckle and always deny it.  Through a consistent and daily submission to God, Dad has passed down to me so much more than his looks, his mannerisms and yes, his poor vision.  He didn’t give me a sermon and he never nagged or even gave me persistent reminders.  He walked humbly with God and taught me the most tiring way.  He walked the walk and he walked it even to his last days.

With an adventurous and energetic wife and three feisty girls, my dad has had a lot to “endure” throughout his life.  On my end, I’ve never been afraid to argue with pastors and in my teenage years, I gave him little respect. I resented his decision to become a pastor and wasn't afraid to give him a piece of my mind.  In return for my bitterness, Dad has always loved me and given me affection, even when I would brush away his hugs and shrug his hands off my shoulders.  When I’ve criticized, argued and vented, he listened to me and let me have the last word. He never retaliated or fought back. He never threatened me to behave or told him I needed to respect him more.  He never reminded me that I needed to be appreciate him for his patience with me.  And he never even murmured, rolled his eyes or sighed out of frustration because of my immaturity.  He strategically had me memorize Proverbs 15:1 as a kid, “A gentle answer turns away wrath, but a harsh word stirs up anger.”  And in his mind, I’m sure he prayed and prayed and prayed.
Through his continual prayers and his life, God has used my dad to win me over to Christ.  What would life be like if I didn't have my hope in the Lord?  I praise God that I too can be with God one day and that I have joy, hope and purpose from an awesome God.  God's timing is perfect and his ways are best.


Dad, people may say I look like you on the outside, but my prayer is that I would develop the same heart for God that you had on in the inside.  I look forward to the day that I get to see you again.  Breathe well. Walk freely. Eat with ease. Garden. Smile a lot.  Jump rope for God's sake!  And break lent in heaven.

Email ThisBlogThis!Share to TwitterShare to FacebookShare to Pinterest
Labels: Chinese

When Good Things Happen (Sung in Honor of Goong Goong) 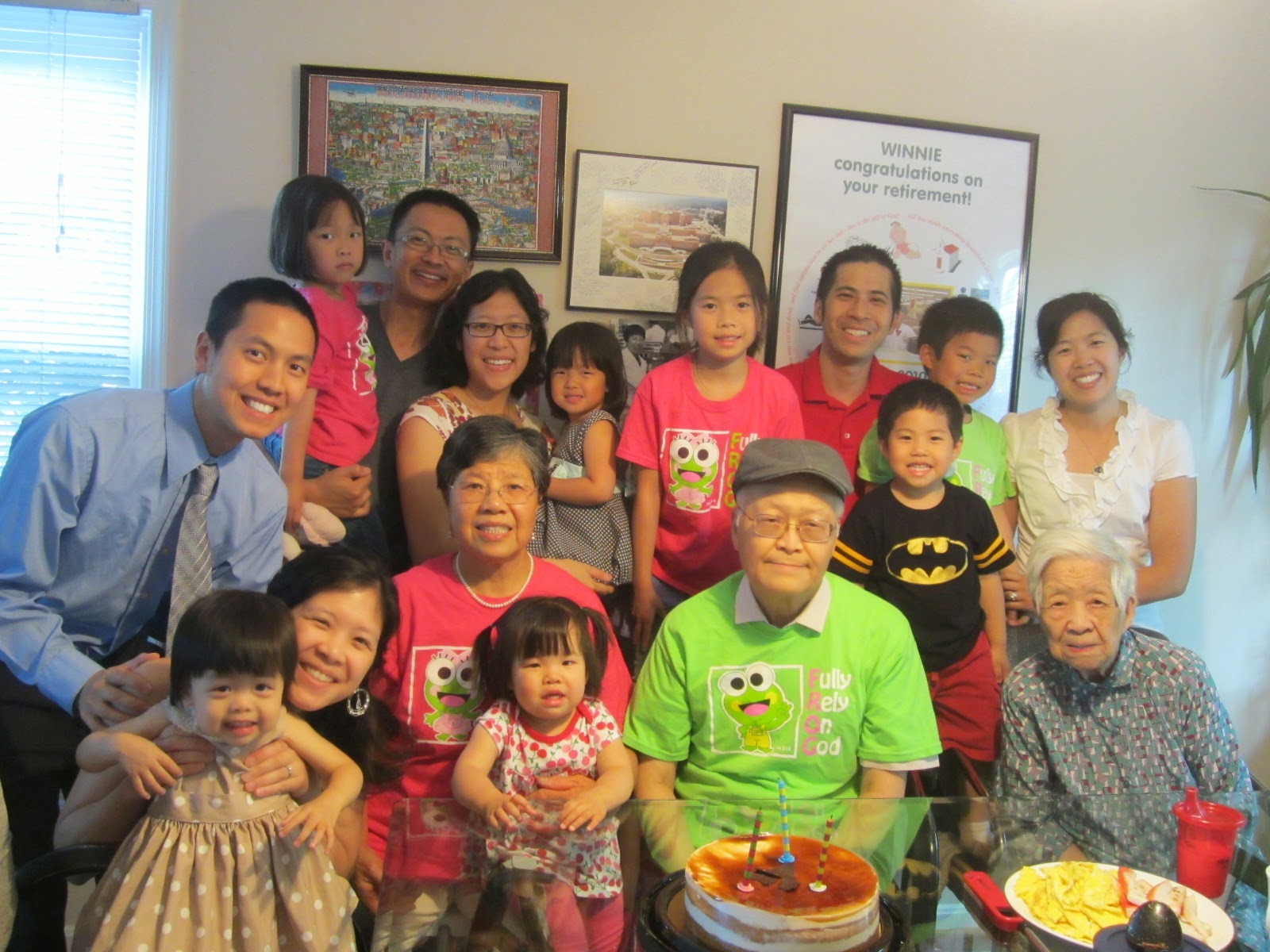